Accessomophis is the term fashionistos' should be adding to their fashion dictionary this season.The trailblazer behind this vocabulary is the multi dynamic, Virgil Abloh. If you have not noticed already, Virgil Abloh has shook the fashion industry and we are here for it! Virgil Abloh is a fashion designer, DJ, creative director, and music producer. He is what we call, a jack of all trades! Bachelor of Science in civil engineering and a Masters in Architect, he began his career in fashion in 2009 interning at Fendi. He also began his collaborative relationship with Kanye West who was also interning at the Fendi's fashion house in Rome, Italy.

A year later, he is a solid addition to Kanye's camp. He served as creative director for Ye's creative agency called DONDA. A year later in 2011, Abloh was the artistic director for Kanye and Jay Z joint collaboration, Watch The Throne. Pretty sure the hard core Kanye fans, knew that already but Abloh is a creative genius. After that, he launched his own small boutique for couture streetwear called Pyrex Vision. This is the season when he reworked Ralph Lauren Rugby flannel shirts and it sold out overnight. You could easily cop the rugby flannel for $40 bucks but Virgil screen-printed his own designs on the back and sold them for at least $550! He did get a little backlash about the markup, but hey it sold out overnight plus it ain't tricking unless you got it right!?.

After retiring the boutique, he opened his second business in 2013. A Milan based high-end women's wear brand known as Off-White. Since then, he has stretched his creative innovations across multiple industries outside of fashion and music alone. He also started his own furniture company in Tokyo, Japan called Grey Area. Virgil Abloh is highly known for his collaborations with influential brands. He was asked to design a new collection in conjunction with Nike, called "The Ten" where he reconstructed a variety of Nike Classics and best sellers like the Nike Air Force 1, Air Max 97, and Air Jordan 1.

Virgil has worked with conceptual artists like, Jenny Holzer to design lines highlighting positive aspects of immigration, cultural integration, and globalization. His furniture collection with IKEA, named Markerad is scheduled to drop this year. Other partnerships include Vans, Levi's, Vlone, Jimmy Choo, Evian Water, Moët & Chandon. I mean the list goes on, crown him King of collabs!

Virgil Abloh changed history on March 25th, 2018. He was named the artistic director of Louis Vuitton menswear, marking him the first person of African descent to lead the brand's menswear line, as well as one of the few black designers at the helm of a major French fashion house.

His success is solely rooted in his approach to creation and design. Virgil has a 3% rule: never take a design more than 3% from its original form. Abloh also employs quotation marks stylistically when creating in order to convey ironic detachment from society and social norms. Virgil is highly self-aware and is current with the culture, he literally becomes his surroundings and the majority of his inspirations are documented while traveling. Another method he stands by is completing just 70% of his projects before moving to the next project, allowing him to work on a million projects at once!

Virgil debuted his first collection for Louis Vuitton at Spring/Summer 19 Men's Fashion Week at the Palais-Royal gardens in Paris, France. The runway was painted into a rainbow which corresponded with the color pallet of the collection. A proud moment was the diversity and inclusivity on the runway. The model line-up had representatives from every continent in the world – that were shown on a map that read “We are the world”.

“The biggest goal for a first collection in any scenario is to start so that people can understand the new vocabulary.”

Abloh wrote that statement on his Instagram before his major debut. Each attendee was left a dictionary on their seats or “a liberal definition of terms and explanation of ideas”, is how he explains it. “Accessomorphosis” the term mentioned in the beginning, was the basis of the 56-look collection he called Colour Theory. Virgil describes accessomorphosis as a portmanteau; transformation of an accessory into a garment.

Virgil introduced 3 silhouettes new formal, high end, and casual. The collection showcased coats, suits, vest/harness, and boxy trousers. Abloh took signature pieces like the Keepall, the Papillon, Steamer, and the Petite Malle (a miniature version of the transatlantic trunks which made the household name in the 1800s) and used his 3% concept. The handbag color scheme consisted of blue, yellow, red, green, and iridescent. Others in the stable Monogram Empreinte leather with the traditional hardware detailing. Majority of the leather goods were created with multi-colored ceramic chains, which also were used as bracelets and necklaces, while ankle boots and vintage suede sneakers completed the look. 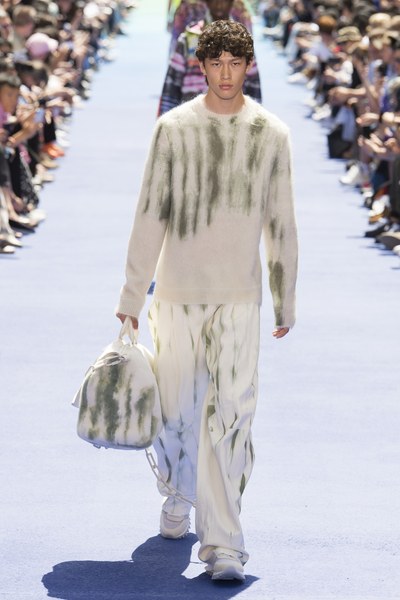 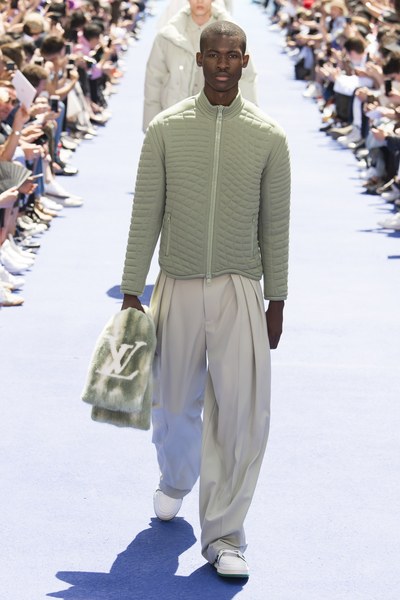 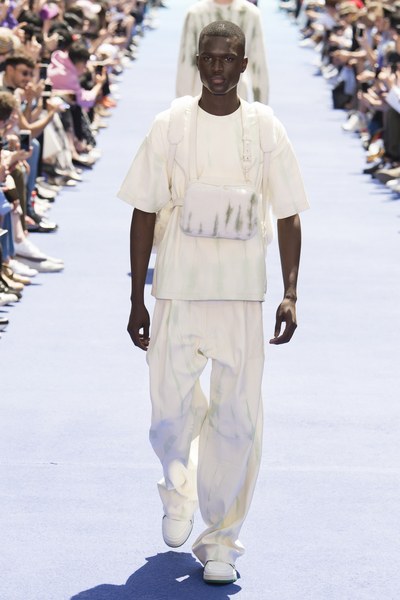 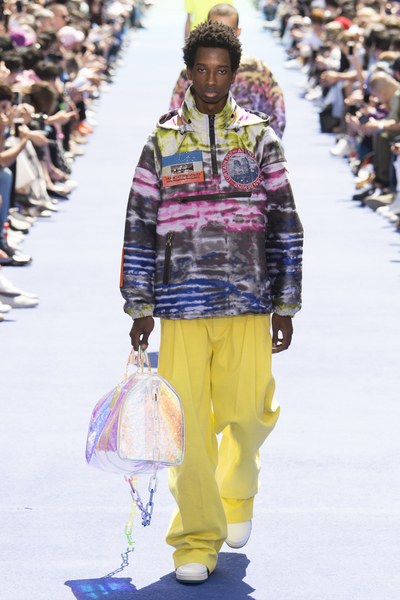 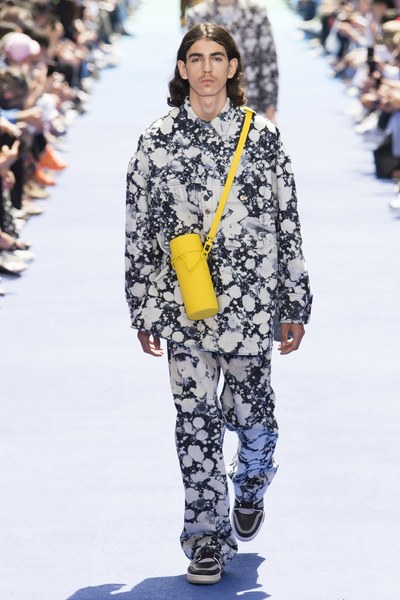 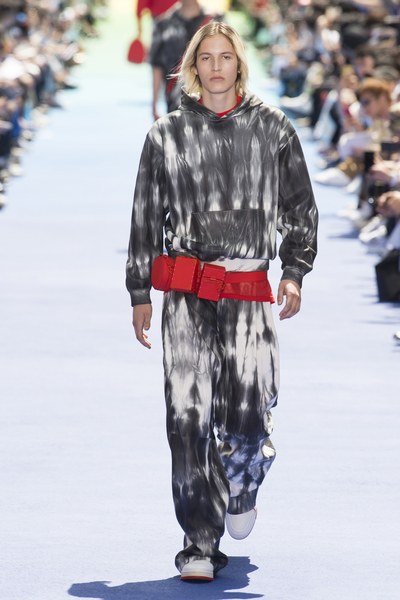 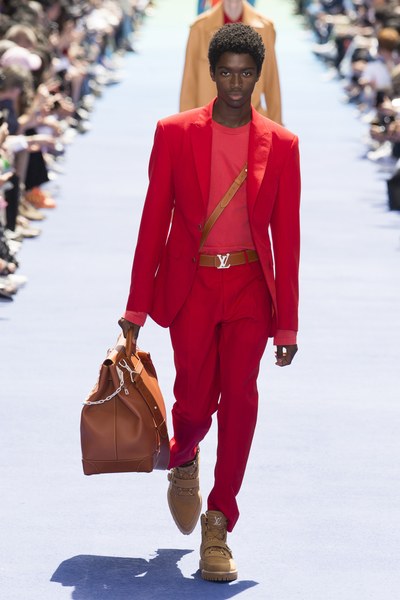 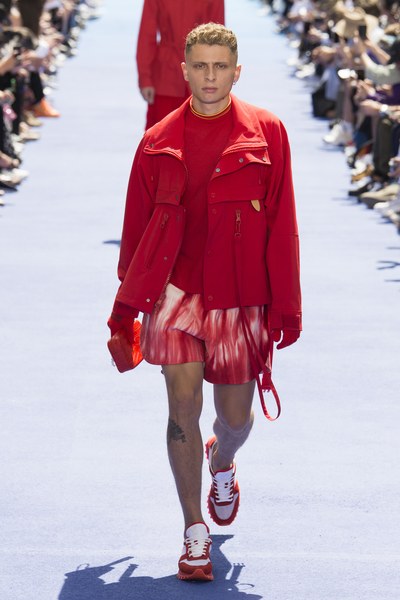 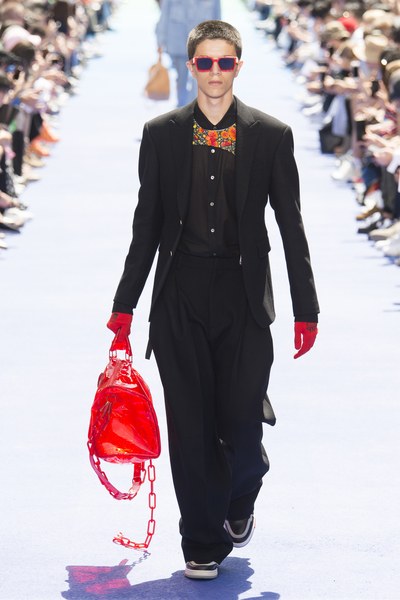 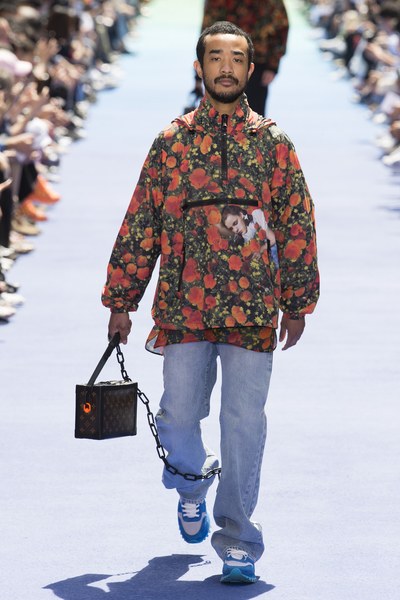 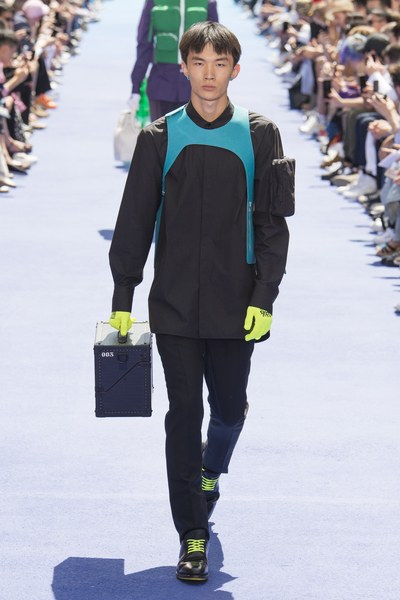 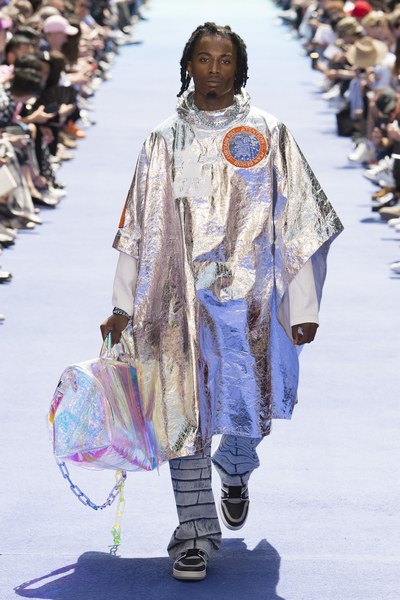 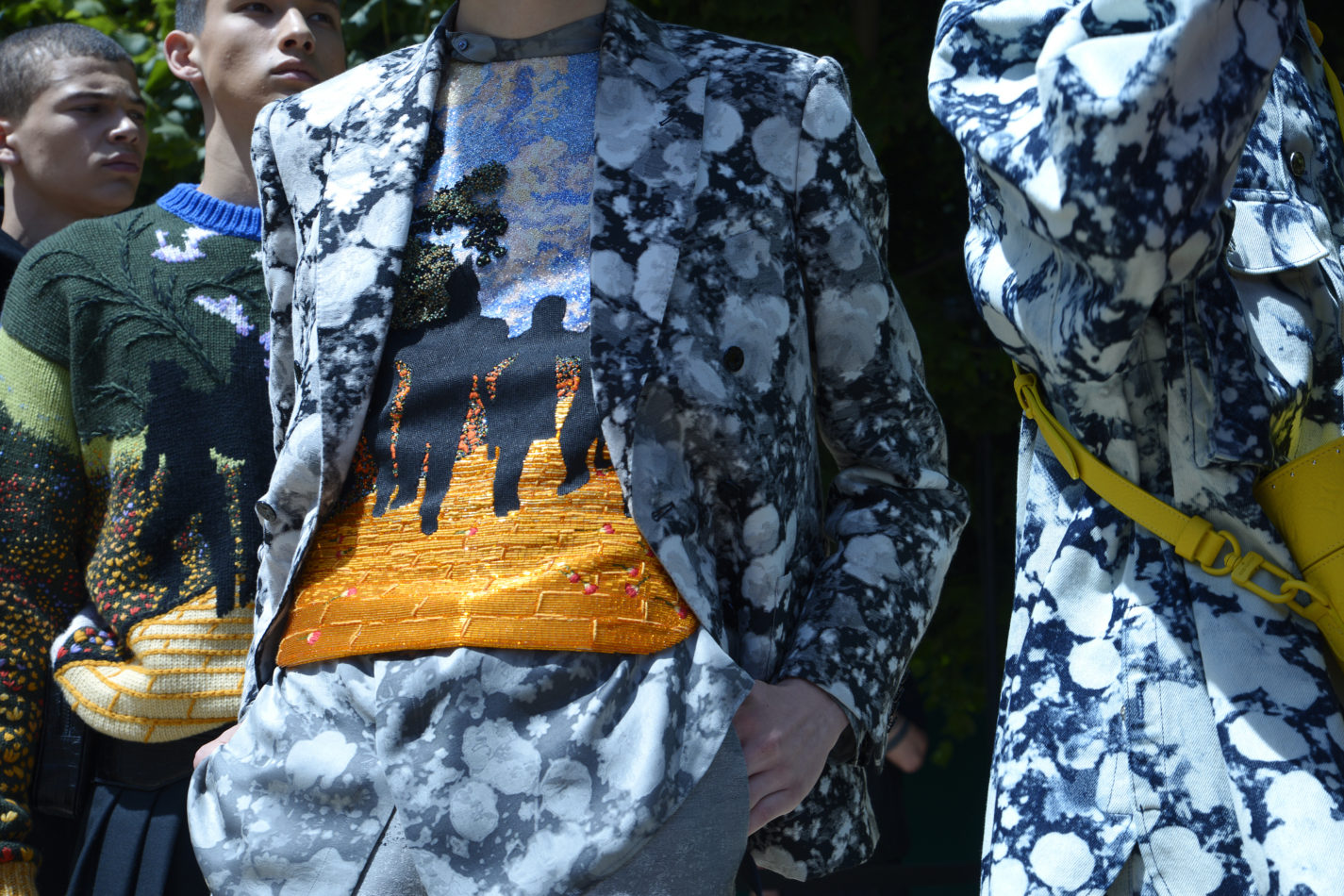 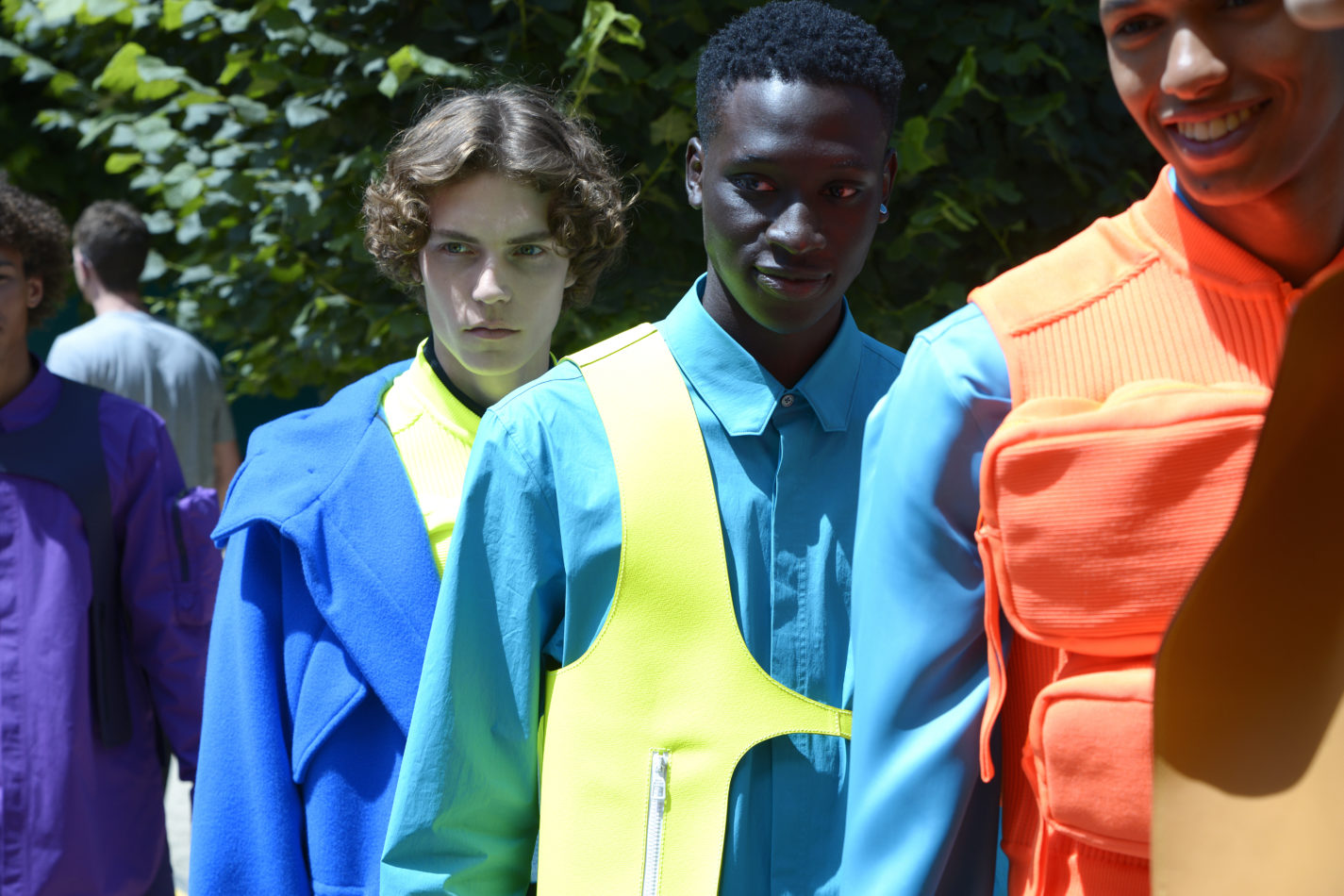 His overall theme was the Wizard of Oz, why Dorthy and the yellow brick road you ask? He stated it represented friendship and unity. The concept of bond and inclusivity is a beautiful thing to witness and what the world needs right now. From the all inclusive runway to the growing color scheme on the runway; it was refreshing to see Virgil disrupt the cookie cutter approach Louis Vuitton likes to hold on to. Department Manager at H&M in Chicago, Alante' Cummings tweeted it best... "Virgil is doing for LV what Tom Ford did for Gucci".

Since his debut, he has been creating quite the buzz over his SS19 collection. Hosting pop ups overseas and blessing fashionistos on the gram with edgy and innovative sneak peaks. In celebration of his latest collection, Virgil collaborated with Chrome Hearts's West Village exclusively designing a temporary residency in NYC to house the highly anticipated collection. Before the residency, Virgil unveiled artwork tailored towards the collection across New York City that were vibrant and eye catching.

During the residency, Louis Vuitton also debut its first luxury headphones which where on display in the mannequin ears. Virgil designed a Louis Vuitton table and chair set exclusively for the residence that was reported to be worth over $15,000 dollars. He also revealed a bedazzled white glove which honored the King of Pop, Michael Jackson. Which leads to his sophomore debut Autumn Winter 19 Collection. 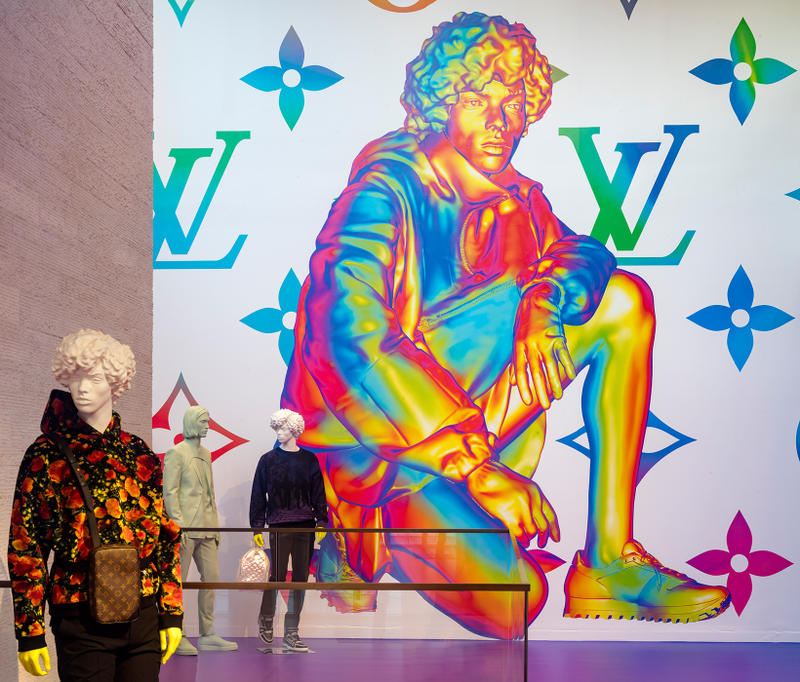 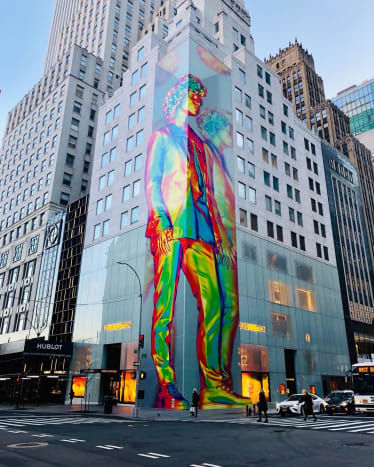 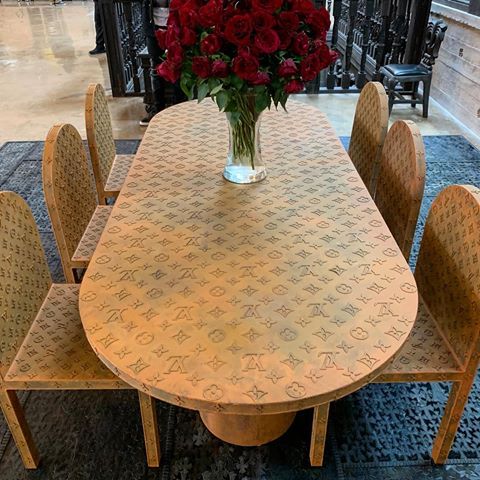 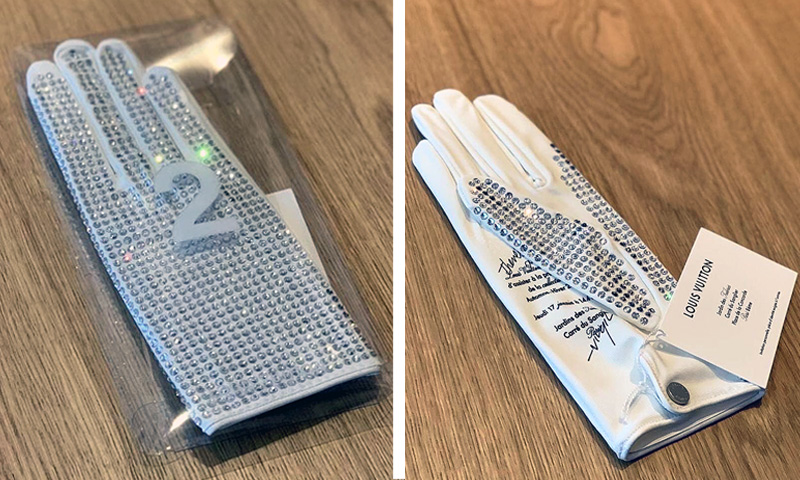 Some of you who are unfamiliar maybe thinking... We have not even seen the first collection in stores yet and he is already on his sophomore debut. Yes people! Welcome to the fashion world where runway and high end styles are released way before you get a chance to actually buy them. Good news Virgil's Spring Summer 19 collection will launch very soon, just wait on it. Virgil's AW19 runway show dropped this past Thursday and he did not disappoint.

Part two elevated from the Wizard of Oz to the afro version known as, The Wiz. Specifically, a special ode to (you guessed it) Michael Jackson. Show goers anticipated the collection while "Wanna Be Startin Somethin" by Michael Jackson fills the runway which is an abandoned street similar to the one in Michael Jackson's Billie Jean Video. "Wanna be starting something.. you got to be starting something" "Ma ma sa, ma ma coo sa" Dev Hynes chants these specific lyrics live while the models walk diagonally across the runway.

His sophmore debut was very consistent with his first message of frienship and unity. He stays true to diversity and inclusivity. He kept the colors bold and vibrant while playing on afro-culture prints and pajama like sets. Statement looks include layers, tailored suiting, wide leg fluid trousers, coats, and military style jackets. The handbags; he definitely showcased bold colors and more transparency but with contrast in the monogram detailing. What stood out was his expression through scale! A huge grey backpack showcased and it looked big enough to fit your entire life in.

Another highlight literally, was the light show segment. The fiber optic-infused monochrome bag and light-show-bearing sneakers was a showstopper. This glow in the dark craze will definitely be a wave this season in fashion. Consistent with paying homage to the King of Pop, closing the show the guitarist walks on the runway in the dark as the streets light up in squares. Just like the infamous scene in the Billie Jean video. What stood out the most, was his humanitarian approach. Virgil also showcased different cultures flags on bags and garments. 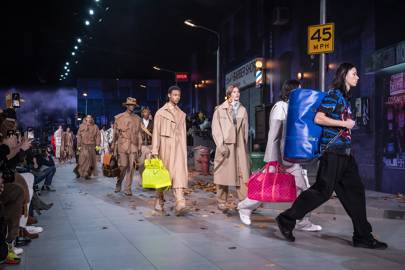 Flags like Pan-African, Republic of the Congo, Australia, Japan, and Puerto Rico wave proudly across the runway. His message was clear to me, a call to the United Nations. The United Nations is an intergovernmental organization whose tasks are to maintain international peace and security, develop friendly relations among nations, achieve international co-operation and be a centre for harmonizing the actions of nations.

“Let’s behave like we want the world to be, and not get into the dead end we’re at now.”

To show Michael Jackson was “not to make costume, but to take him as backdrop, to make a point about the humanity in his vision. I wanted humanity in the forefront.” “The bigger question for me here is why are we making clothes? This is menswear—but what makes men; That's way more profound."

If only more politicians used their platforms to create progressive change and provoke thought in uplifting ways like Virgil and other pioneers like Pyer Moss. Artistic Director Virgil Abloh illuminates the values established in his debut collection for the Maison by investigating ideas of individual growth and perception through the lens of inclusivity and diversity. The first chapter titled “Infancy, Childhood, and Adolescence” focuses on the developmental stages that form a man’s identity and wardrobe. Virgil Abloh’s ongoing study of boyhood will be represented on individuals at different points in a person’s upbringing during his new campaign launch. Virgil Abloh hats off to you, we are excited to see how you portray your message, embrace the culture, and shift the vocabulary of luxury fashion because you are definitely startin somethin!

FROM PARIS TO THE WORLD - HOUSE OF DIOR